Last time I found this article from LA Times, which states that the share of startups in US economy is actually diminishing in recent years. It is quite unexpected, as the general opinion is that startups are behind every corner, florishing more than ever. 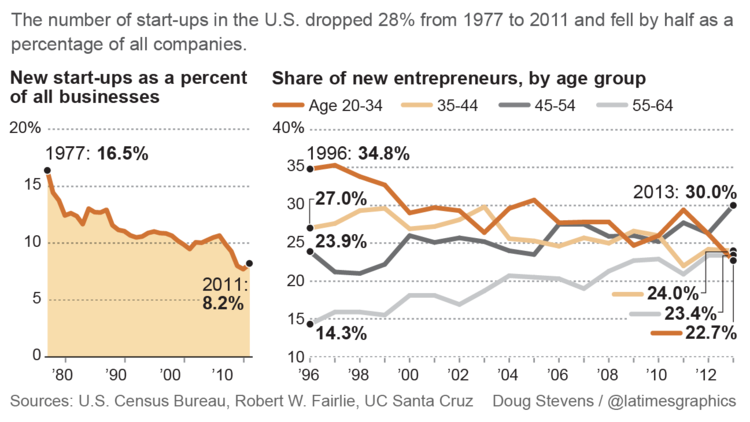 The grim reality seems to be that the share of startups in the national economy is regularly dropping since the 80’s and now they represent only 50% of what they used to in 1980. Let’s not forget that these data include the startup mecca, the San Francisco bay. They offer a few explanations why is it so:

Some experts said entrepreneurship has been hurt by a societal tilt toward risk aversion brought on partly by a sluggish job market and high student debt. Those factors coaxed Anna Baxter to opt against an entrepreneurial path after graduating from UCLA’s Anderson School of Management last year.

Baxter, 36, won a prestigious award at Anderson for co-founding a company that rents gowns for bridesmaids. The company got venture capital funding and had encouraging prospects. But Baxter took a job at tech giant Adobe Systems Inc. to help pay $110,000 in student loans. Her co-founder, who stuck with the company, had no debt, Baxter said. “A lot of my classmates upon graduation didn’t have jobs. Having a secure job with a really good salary was something to be considered carefully,” Baxter said. “I definitely went down the path in my head of ‘OK, what happens if this fails in six months? How hard is it going to be for me to find a job?'”

Let’s go back to the original graph.

The picture on the right clearly shows that in fact it is the people over 45 that open more startups than the younger generation. It is quite – sad. It is also counter-intuitive, as someone would expect that it is in fact the young who are more daring, have fresh ideas, and would like to go on the entrepreneurial path. Maybe those 45-ers are the same entrepreneurs who started their businesses in the 80s. Maybe they are just out of jobs and see in their businesses a way to save their social situation.

But maybe the data is wrong, it could be the case.